A keto spinach fatayer made with a low carb pastry and filled with a delicious mixture of spinach, feta and seasoned with lemon and sumac.    Psyllium husk powder gives this pastry an elasticity and flexibility that is needed in a low carb and gluten free pastry.

The real star in this recipe, however, is sumac.   Sumac must be one of my favourite spices and is so hard to get hold of in the Caribbean, where I currently live.  When I do come across it, I growl like a junk yard guard dog to anyone perusing the aisle and stock up with a few bottles.  Sumac has a delicate lemon flavour. We love it on our morning eggs, fried or scrambled to lift the flavours up.  If you don’t have sumac to hand, add more lemon rind to this recipe and a splash more lemon juice.

How to make spinach fatayer

The shape of these spinach feta triangles is made by pinching the top of the ends of the pastry together and then pushing the bottom third together.  Once you get one right, the rest are easy to make. 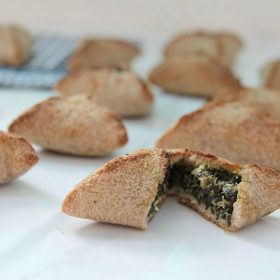 Calories: 57kcal
Do you know your macros?Check out Free Macro Calculator!
Tried this recipe?Mention @KetoVegetarianRecipes on Instagram or hashtag it #ketovegetarianrecipes!