Creamy pumpkin halwa is made into a low carb and sugar free dessert that can also be enjoyed as a breakfast pudding! The spices and sweetness of this dessert make a great Fall low carb treat.

If you are looking to try pumpkin as a dessert other than traditional pumpkin pie or cheesecake, try this easy and creamy pumpkin halwa recipe.

We were pleasantly surprised at how much we enjoyed this pumpkin dessert and it's taste. It has a creamy texture with the right balance of sweet and creamy, enhanced by the cardamon spice.

Pumpkin is a great low carb squash with just 6.5 net carbohydrates per 100g serving and packed with nutrients. Pumpkin is just as comparable with broccoli with net carbs and can be enjoyed in both sweet and savory recipes.

Halwa comes from the Arabic word "Hulw" meaning sweet and originally was made from a paste of dates and milk. The dessert arrived in India via Persia and there are many variations made with semolina, almonds and milk. Sugar features in all recipes, making them unsuitable for a low carb diet.

During our time in the Middle East, we had often come across carrot halwa during the holidays, but never pumpkin. Carrot may be sweet and colourful but has too many carbs for a low carb diet but this healthier pumpkin version of the dessert hits the spot!

Halwa is also known as Kaddu ka Halwa and is often served as a dessert for Diwali.

WHAT PUMPKIN IS USED FOR HALWA?

It's easier to say do not use Jack-O'-Lantern pumpkins as they are not suitable for cooking.

Fresh pumpkin is a must for this dessert. Canned pumpkin pie is not to be used. Use fresh and grate or cube it.

HOW TO MAKE PUMPKIN HALWA

Pumpkin halwa can be cooked in an instant pot or on a stove. We have chosen to cook this on a stove and grated the pumpkin for easier cooking.

When cooking, stir regularly to ensure that the pumpkin mixture does not stick to the sides of the pan.

Melt the ghee in a pan

Add the grated pumpkin and cook until soft

Add the remaining ingredients and simmer.

Serve with pistachio nuts and enjoy hot or chilled.

Fresh pumpkin rather than pumpkin puree is essential to this low carb Indian dessert but you can make a few substitutions if you don't have every ingredient to hand.

If you have leftovers they can be stored in the fridge. This pumpkin dessert is delicious the next day, serve chilled for breakfast.

HOW TO MAKE THIS VEGAN

Making this pumpkin dessert vegan is as simple as replacing the ghee with coconut oil. The texture may not be the same, so we would recommend adding an extra tablespoon of coconut milk or even coconut cream.

If you enjoy pumpkin as a dessert, then you may enjoy these low carb recipes. 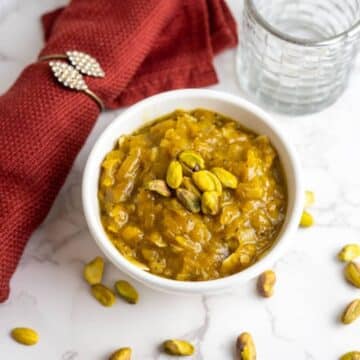 Makes 3 small servings The net carbs will be the total carb count minus the fibre count. Carb count excludes sugar alcohols. Any nutritional analysis on the website is based on an estimate, calculated by Spoonacular from the individual ingredients in each recipe. Variations may occur for various reasons, including product availability and food preparation. We make no representation or warranty of the accuracy of this information.