This amazing keto zucchini bread is baked with coconut flour and flavoured with warm spices. Chopped pecans are added for a light crunch.

A dairy free zucchini bread that is paleo, gluten free and has only 4g net carbs a slice. This is the best keto zucchini bread with coconut flour that you will bake! It's so moist and utterly delicious! The pecans are a great addition too.

This is the best zucchini bread that I have baked to date. I normally use almond flour and make a savoury version with cheese but wanted to try a zucchini bread with coconut flour. Coconut flour can be very absorbent and seemed a good match with the moist zucchini.

How many carbs in low carb zucchini bread?

The carbs in this zucchini bread are just 4g net per slice. The loaf should yield about 10 slices. The fiber content is thanks to the flaxseed meal and coconut flour.

How to make keto zucchini bread

This is an easy low carb zucchini recipe to make and very simple. It's made in one bowl so there's less washing up too! The dry ingredients are mixed, then the wet are added. Stir in the zucchini and pecans and you are ready to bake!

The zucchini bread can take an hour to cook. When I removed it from the oven I had a slight panic that it was undercooked. After leaving it in the tin for 15 minutes, a firm loaf was removed.

The warm spiced flavour of this keto zucchini is due to the combination of cinnamon and allspice. Allspice is a popular spice in the Caribbean and I usually use it a lot at Christmas.

Allspice is not a combination of spices but is it's own spice. It comes from ground berry of the tropical Pimenta dioica tree and is native to the West Indies and Central America. It has a similar flavour to cloves and nutmeg.

If you don't have a jar of allspice to hand, substitute it with 3½ teaspoons ground cinnamon, 1¼ teaspoons ground nutmeg and a pinch of ground cloves. Use 1 teaspoon of this mixture for this recipe.

This coconut flour bread is best stored in the fridge. I keep mine in a sealed container. As for how long it will last, I would guess about 5-7 days but it never lasts as long as that in our house!

Use other spices such as pumpkin spice mix or plain cinnamon.

Omit the pecans for a nut free bread, or swap them with chopped walnuts.

If the bread looks like it's not cooked thoroughly after an hour, baked for an additional 10 minutes.

I have not made an egg free version of this (dairy free is different to egg free). I think it would be a heavier texture but perhaps pumpkin puree could be substituted for the eggs. 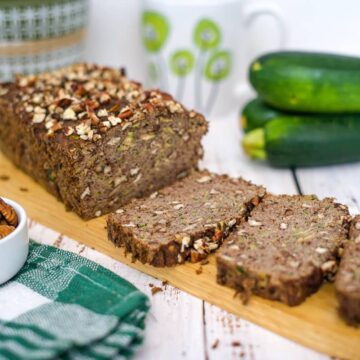 Makes 10 slices at 4g net carbs a slice. The net carbs will be the total carb count minus the fibre count. Carb count excludes sugar alcohols. Any nutritional analysis on the website is based on an estimate, calculated by Spoonacular from the individual ingredients in each recipe. Variations may occur for various reasons, including product availability and food preparation. We make no representation or warranty of the accuracy of this information.