A low carb vegan cranberry tart with a chocolate almond flour crust is a colourful and delicious holiday dessert. Crisp and refreshing, a slice of this cranberry tart is a great end to a meal.

The gluten free crust is baked but the smooth filling is a blend of sweetened cranberries with coconut milk and set using agar agar. The slight sweet flavour of the chocolate crust pairs well with the sharpness of the cranberries.

How to make vegan cranberry tart

This is an easy tart recipe and does not involve any rolling of pastry. The tart pastry dough is pressed into the case.

There are two stages in making this low carb vegan dessert.

For the tart case we used a 8 inch case with a removable bottom. The completed tart was fairly easy to remove without and cracking disasters.

What is Agar Agar?

The filling for this low carb vegan dessert needs to be set like a jelly. Gelatin is not usable because it made from an animal product. The vegetarian alternative to gelatin is agar agar. This is a natural jelling agent that is made from a red algae. It is colourless, tasteless and is sold in flakes or powdered form.

The only nutritional value of agar agar is the fiber. It has no carbs or calories either. Use it as a natural thickening for soups, sauces and desserts.

How to store a cranberry tart

The cranberry tart should last up to 5 days, stored in the refrigerator.

We used a brown low carb sweetener with the cranberries but you could use a white granular or powdered sweetener. Taste test when adding this to the cranberry mixture as you may prefer it sharper or sweeter than ours.

Add other low carb berries such as raspberries or blackberries for a richer berry flavour.

This keto vegan tart is best made the day before you want to serve it. It needs to set overnight to ensure it's firm enough to slice. 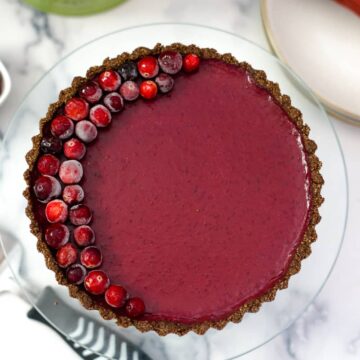 The net carbs will be the total carb count minus the fibre count. Carb count excludes sugar alcohols. Any nutritional analysis on the website is based on an estimate, calculated by Spoonacular from the individual ingredients in each recipe. Variations may occur for various reasons, including product availability and food preparation. We make no representation or warranty of the accuracy of this information.