This is an easy stuffed spaghetti squash recipe that is loosely based on a vegan lasagna. Cooked vegetables with the marinara sauce and vegan cheese sauce all come together for a delicious main dish.

The biggest surprise of this dish was my husband's reaction. I thought he would not enjoy the flavors as he is not the biggest fan of spaghetti squash but one taste and suddenly I had to share. The second stuffed half I have planned to eat the next day disappeared!

How Many Carbs in Spaghetti Squash?

Spaghetti squash can be enjoyed baked and stuffed or with the filling used as a keto spaghetti, served with a sauce.

Just a few ingredients are used for this twice baked spaghetti squash recipe making it an easy recipe to make and to make ahead too.

If you have the Marinara and vegan cheese sauce already made, this is a quick and easy recipe to make. Baked spaghetti squash bowls are stuffed with a hearty vegetable filling and baked.

Add the sauce to cooked spaghetti squash and stuff into boats

This twice baked spaghetti squash recipe can have a few tweaks if you replace the zucchini.

How to Cook Spaghetti Squash

Although this recipe bakes the spaghetti squash before stuffing, it can also be cooked in the microwave or air fryer.

Store any leftovers in the fridge in an airtight container. It will last up to 4 days. Reheat in the oven at 350F degrees for 10-15 minutes.

If you enjoy spaghetti squash, try these other low carb vegan and vegetarian recipes.

Can I Freeze Cooked Spaghetti Squash?

Yes! Freeze the cooked spaghetti squash by either wrapping it in silver foil or placing the cooked halves in a zip lock bag. When it's been frozen and then thawed out, its texture is much more like the freshly cooked variety.

Can I Make This Ahead?

This is a great recipe to make ahead if you have the marinara and vegan cheese sauce ready to hand. Assemble and store in the refrigerator until you are ready to eat and pop it in the oven to heat for 10-15 minutes. 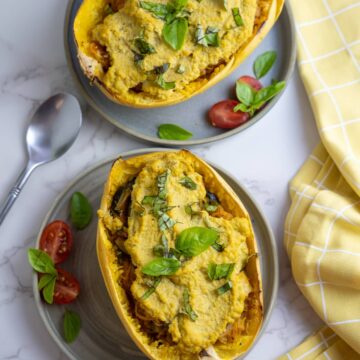 This recipe assumes that the vegan cheese sauce and Marinara sauce have already been made. Makes 4 servings with half of the spaghetti squash slice being one serving. The net carbs will be the total carb count minus the fibre count. Carb count excludes sugar alcohols. Any nutritional analysis on the website is based on an estimate, calculated by Spoonacular from the individual ingredients in each recipe. Variations may occur for various reasons, including product availability and food preparation. We make no representation or warranty of the accuracy of this information.